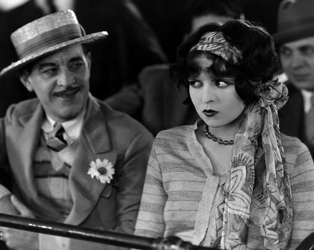 Dr Gwenda Young will discuss silent film, the 1920s, and Clara Bow as icon of the Jazz Age

She was the original IT girl, the “real Jazz Baby”, the teenager from Brooklyn that conquered Hollywood and enraptured the public. As her fellow actress Louise Brooks observed:Clara was the 1920s.
While many silent comedies relied heavily on slapstick and sight gags, Clara Bow offered comic performances that were sexy and lovable. In IT, perhaps her best film, she is plucky shop girl Betty, who falls in love with the owner’s son only to have him reject her. Bow’s natural comedic talent, as well as her sheer star magnetism, make this one of the most entertaining films of the Jazz Age.

Dr Gwenda Young will discuss silent film, the 1920s and Clara Bow as icon of the Jazz Age