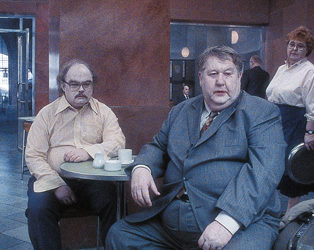 With commentary by John Sherlock Assistant Professor of Screenwriting at TCD, Justin Macgregor.

Absurdist comedy from Sweden’s Roy Anderson. Taking a look at corporate life, the former commercials director uses a fairly static camera to record seemingly disconnected events – a man losing his job, another burning down his shop; a magician sawing a volunteer in half.

Justin Macgregor will talk about the Scandinavian comic film and the keen edge it negotiates with tragedy.