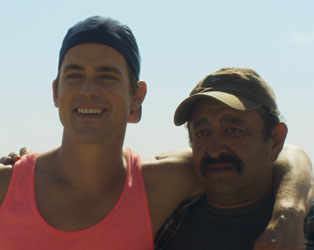 A roundup of reviews for new releases at the IFI from Friday June 7th.

“The Los Angeles setting allows Mr. Lelio to play with the Californian rejection of age, and death, and Ms. Moore is magnificent as the kind but irrepressible Gloria.”
4/5 – Irish Independent

“Whether or not you have seen the original film, there is a terrific performance here from Moore, and an equally good one from Turturro, who may be entering into his own golden years of bittersweet character work.”
4/5 – Guardian

“The pleasure of “Gloria Bell,” whether or not you’ve seen “Gloria,” is watching Moore wrap herself in the role like a soft shawl.”
3.5/4 – Seattle Times

“Because of Moore’s open-hearted, captivating portrayal of the title character, repetition won’t be a drawback for those who’ve seen Gloria. She makes the role her own with brio and woman-power strength.”
Toronto Star

PAPI CHULO
“We end up with a small film that answers most of its own questions satisfactorily. The Butler did it (again).”
4/5 – Irish Times

“It’s a thoughtful, very funny, and deeply touching exploration of our shared humanity and shines a light on the importance of kindness.”
5/5 – RTÉ

“The relationship between the sweet, awkward and fragile Bomer and the tolerant, bemused and underplayed Patiño is a thing of joy.”
3/4 – Observer

“A thoroughly researched rise and fall story with artistic flair and a noir-esque cinematic mystique.”
3.5/4 – RogerEbert.com

“A roller coaster of fabulousness and folly only marginally compromised by its excessive length and fussy structural gimmicks.”
Hollywood Reporter

KIND HEARTS AND CORONETS
“In short, beyond improvement.”
5/5 – Irish Times

“The Ealing genre reached utter perfection with this superb black comedy of manners, made in 1949, and now on rerelease for its 70th birthday.”
5/5 – Guardian