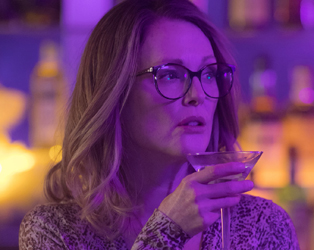 Gloria Bell (Julianne Moore), a fifty-something divorcée, is struggling against loneliness and invisibility; she spends too many evenings dancing her blues away to disco anthems at Los Angeles singles clubs, searching for a meaningful connection.

Accommodating to a fault, Gloria considers the needs of others before her own, yet she is becoming less essential to her two grown children, Peter (Michael Cera), a young father with relationship problems of his own, and newly pregnant Veronica (Alanna Ubach), who has fallen for a Swedish big wave surfer. An opportunity for happiness appears in the form of newly-divorced Arnold (John Turturro), a charming yet similarly lonesome paintball enthusiast who sweeps her off her feet.

In remaking his Spanish-language film from 2013, Lelio has subtly recalibrated the character of Gloria for Julianne Moore, who brings her customary humanity and intelligence to the role.