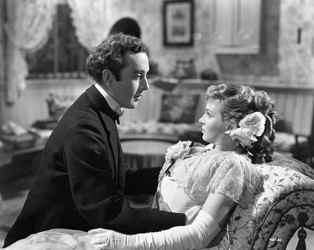 IFI FILM CLUB – Join members of the IFI team for an informal discussion following the 18.10 screening on Tuesday 11th June 2019.

Although they represented just a fraction of its output, Ealing Studios is indelibly associated with a small number of comedies it produced in the space of roughly a decade, such as The Lavender Hill Mob (1951, featuring one of Audrey Hepburn’s first appearances), The Man In The White Suit (1951), and, of course, The Ladykillers (1955). Along with this last, Kind Hearts and Coronets represents arguably the jewel in Ealing’s crown.

In this deliciously black and subversive comedy, poor-born Louis D’Ascoyne Mazzini (a wonderfully haughty Dennis Price) decides to murder the eight D’Ascoynes (all played by the chameleonic Alec Guinness) standing between him and the dukedom he feels is rightfully his, denied to him because his mother married for love rather than social standing. The film remains an unalloyed pleasure, with its sparkling and sophisticated dialogue brilliantly performed.