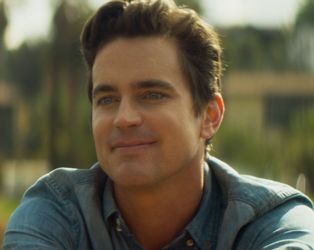 In Los Angeles, the perfect world of gay TV weatherman Sean (Matt Bomer) is shaken with the end of a significant relationship and a very public on-air meltdown.

Forced to take time off, he fills his empty days and his empty house with some hired help in the shape of straight, middle-aged family man Ernesto (Alejandro Patiño). Sean gamely tries to befriend the taciturn Ernesto as he goes about his tasks and gradually, despite wildly different life experience, age, language and cultural differences, a delicate friendship begins to form.

Set against a brightly-hued Californian backdrop filled with tasteful interiors and handsome cast, the film is a pleasure to behold. Writer/director John Butler touches deftly on serious matters – ethnicity, migrant labour, class, loneliness and mental health – in an uplifting comedy that is a paean to the joy and value of male friendship.