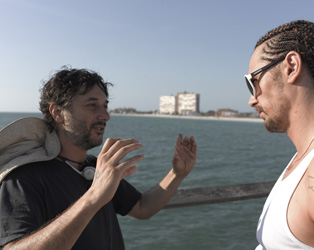 Despite a relatively small output, Harmony Korine has established himself as a unique talent in contemporary American cinema. His films focus on the inhabitants of the very edges of society, ignored by the mainstream. His affection and empathy for these figures is sincere, framed in an aesthetic so defiantly and uncompromisingly personal as to have been frequently misinterpreted as confrontational over the course of his career. He first came to prominence as the teenage writer of Larry Clark’s Kids (1995), a cause célèbre for its unflinching depiction of casual sex, violence and substance abuse among teenagers. While Clark was loudly accused of lascivious exploitation of the young cast, the real story was the emergence of Korine’s authentic voice.

On moving to directing with Gummo (1997), Korine had the freedom to develop a style of filmmaking that is usually non-linear, abstract, and peppered throughout with the absurd and the surreal. While there have been changes and refinements to his methods over the course of his career, each film remains strongly identifiable as that of Harmony Korine, who is, according to critic Roger Ebert, “the real thing, an innovative and gifted filmmaker whose work forces us to see on his terms.”