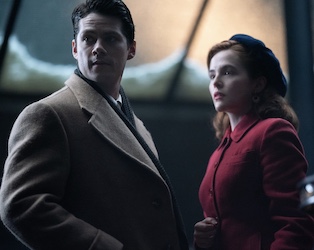 REVIEW ROUNDUP: CODA, THE OUTFIT, MURINA, PRAYERS FOR THE STOLEN

This week’s new releases at the Irish Film Institute on Friday, April 8th 2022 are CODA, The Outfit, Murina, and Prayers for the Stolen. Read on for a selection of reviews or pop in to make up your own mind!

“Only an utter malcontent could prove entirely resistant to Coda’s charms.”
4/5 – Irish Times

“CODA is a radiant, deeply satisfying heartwarmer that more than embraces formula; it locates the pleasure and pureness in it, reminding us of the comforting, even cathartic, gratifications of a feel-good story well told.”
Hollywood Reporter

“Caring, boisterous, and adorned with the hugest of hearts.”
3.5/4 – Roger Ebert

“In its straightforward way, the film delivers an emotional knockout. It’s a movie about a family, and by the end you may feel you know them as well as you know your own.”
Variety

“Movies rarely come as chic as The Outfit, a thrifty, continually unpredictable whodunit, fashioned with the same meticulousness found in the bones of a deceptively simple suit.”
3.5/4 – Roger Ebert

“Makes the compelling case that even without labyrinthine murder plots or hard-bitten private eyes, a young girl’s passage into adulthood can be the perfect, darkly dazzling vehicle for a sunshine noir.”
Variety

PRAYERS FOR THE STOLEN

“A complex, subtle, tender and heart-rending story of a young girl’s upbringing in a village menaced by the drug cartels and people traffickers.”
4/5 – Guardian

“”Prayers for the Stolen” shines a much-needed light on the consequences of Mexico’s war on drugs, specifically highlighting the plight of the nation’s women and girls.”
B – indieWire

“A darkly dazzling dream of life in the cartel-blighted Mexican hinterlands.”
Variety

“There’s a haunting beauty to Tatiana Huezo’s depiction of the gradual cross-contamination of childhood innocence and criminal aggression.”
3/4 – Slant Magazine