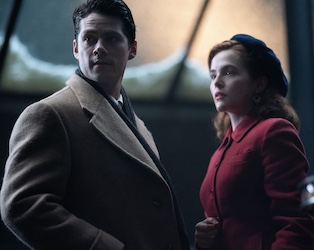 The impeccably stylish directorial debut of Graham Moore, Oscar-winning writer of The Imitation Game (2014), is a satisfyingly convoluted and unpredictable gangster tale. Saville Row-trained tailor Leonard (Mark Rylance) is nothing if not self-effacing, a trait valued by the local tough guys who occasionally use his place of business in mid-1950s Chicago as both cover and hangout. One evening, Richie (Dylan O’Brien), hot-headed son of mob boss Roy (Simon Russell Beale), strolls in with psychopathic sidekick Francis (Johnny Flynn). Leonard and assistant Mable (Zoey Deutch), Richie’s latest fling, are drawn into their affairs when they reveal their knowledge of an FBI informant within their circle, which also threatens their admission to an upper level crime syndicate. As the hoods try to uncover the identity of the rat, events take surprising and sometimes violent turns in this intricately-plotted film of superb performances and dialogue.