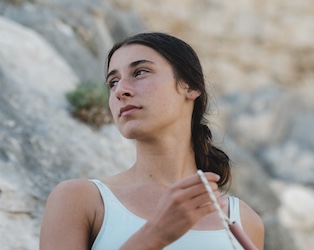 There is palpable animosity between restless teenager Julija (Gracija Filipovic) and her oppressive father Ante (Leon Lucev), who is verbally abusive to her and her long suffering mother Nela (Danica Curcic). Ante expects both to behave like a model of familial harmony when his millionaire friend Javier (Cliff Curtis) comes to visit their idyllic Croatian island home, in large part because he wants to convince Javier to invest in a business proposition that will reinvent Ante’s down-at-heel seaside property into a lucrative tourist destination. As Ante attempts to broker this life-changing deal, the resourceful Julija, who has her sights set firmly on a life beyond the confines of the island, and her parents, recognises in Javier a potential means for escape. Winner of the Caméra d’Or for best first feature at Cannes in 2021, Murina is a psychological drama that brings to the surface the hidden violence between parents and their children.