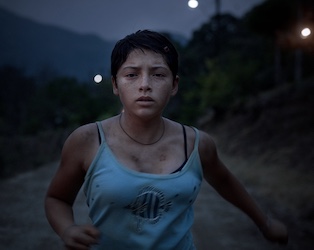 The debut feature from established Mexican-El Salvadorian documentarian Tatiana Huezo tells a powerful coming-of-age story set in a rural village dominated by the drug trade and the threat of human trafficking. Loosely adapted from Jennifer Clement’s 2014 novel, the film follows the lives of three girls in Guerrero whose childhoods are overshadowed by the forceful and violent presence of the local cartel. The film focuses on Ana (played at different times by Ana Cristina Ordoñez González and Mayra Membreño) and her friends, who have been trained by their mothers to flee at any moment. Forced into extreme measures to evade capture, these young women must learn to abandon their femininity in order to navigate their harsh surroundings. A damning indictment of the evils of an unjust war and a sensitive depiction of women living in the crossfire of gang warfare.