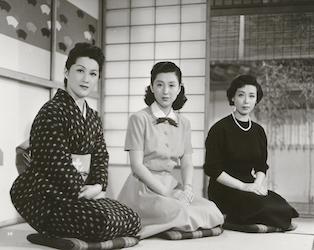 JAPANESE STORY AT THE IFI THIS DECEMBER

December 3rd 2021: The Irish Film Institute (IFI) is delighted to present of a new season of Japanese cinema this December, running from Saturday 4th to Sunday 19th, in-cinema only. Japanese Story includes canonical films from prolific Japanese auteurs Ozu, Kurosawa, Ishikawa and Matsumoto, and follows the Japanese Story Volume I and II collections presented online on IFI@Home earlier this year. Melodrama, samurai cinema and gandai-geki post-war drama are on offer in this season spanning 1951 – 1969.

Speaking about presenting this season of films in-cinema at the IFI, Cinema Programmer Kevin Coyne commented, ‘We hope that this brief season will encourage cinephiles to revisit, and newcomers to explore, the treasures of Japanese cinema, the depth and breadth of which has offered decades of enjoyment and inspiration to audiences and filmmakers alike.’

Ozu’s Early Spring (Tuesday 7th) follows the timeless, melancholic story of lonely office worker Ryo Ikebe, who is drawn to coworker Keiko, in what would be Ozu’s longest film, and a surprising change in theme and pace from his family dramas. The Flavour of Green Tea over Rice (Sunday 5th) follows one woman’s marriage becoming undone, told with gentle humour and quietly confident identity, made the year before Tokyo Story.

Samurai film Yojimbo (Thursday 16th) from Akira Kurosawa presents the story of a samurai in a nineteenth-century rural Japanese town – a classic which has been remade at least three times, as A Fistful of Dollars, Last Man Standing and Coyote Moon. Kurosawa’s esteemed interpretation of Macbeth, Throne of Blood (Sunday 12th), follows samurai commander Washizu, who serves local lord Tsuzuki, and is haunted by ghostly visions when faced with decisions, violence and guilt.

The experimental An Actor’s Revenge (Saturday 18th) from Kon Ishikawa turns the conventions of melodrama on their head – rooted in the traditions of kabuki theatre, the film follows a man adopted by the manager of a theatre troupe after the tragic suicide of his parents. Presenting the queer youth subculture of the late ’60s, Toshio Matsumoto’s Funeral Parade of Roses (Sunday 19th), previously exhibited online in February 2021, screens on Sunday 19th. The experimental genre-bending LGBTQ+ drama represents a cornerstone in the Japanese New Wave, and a cinema experience like no other.

Tickets are available to pre-order from www.ifi.ie/season/japanese-story/.