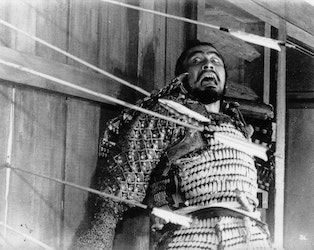 Kurosawa’s famed interpretation of Shakespeare’s Macbeth transposes the setting of the play to feudal Japan, where samurai commander Washizu (the legendary Toshirô Mifune, in the Macbeth role) serves local lord Tsuzuki (Takamaru Sasaki). Returning from battle with fellow general Miki (Akira Kubo), they meet a spirit who prophesies their futures. When the first predictions come true, Washizu’s wife encourages him to fulfil the rest of the spirit’s predictions by murdering his lord. The subsequent guilt and betrayals lead the couple to their psychological unravelling, haunted by visions of ghosts and blood. Kurosawa takes numerous liberties with the source material, from eschewing its dialogue completely, to infusing the film with elements of Noh. Despite this, the film has been acclaimed as one of the great cinematic retellings of the Bard, a strange, beautiful, and distinctly Japanese interpretation of England’s greatest writer.