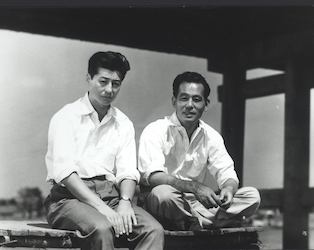 Following the seminal Tokyo Story (1953), Ozu took a rare unforced break from filmmaking, making his return with Early Spring. Turning away from the stories of inter-generational conflict on which he had built his reputation, the focus here is on the melancholy life of the salaryman, the first generation of whom were about to reach retirement age. Shoji (Ryō Ikebe) lives out a monotonous routine, commuting to work in a fire brick manufacturing company from the home he shares with wife Masako (Chikage Awashima). The routine is disrupted when Shoji strikes up a conversation with a typist nicknamed ‘Goldfish’ (Keiko Kishi), a low-key beginning that leads to a full-blown affair that his wife soon suspects. A film in which is revealed through small gestures and moments, Early Spring is often unfairly overlooked in its director’s body of work.