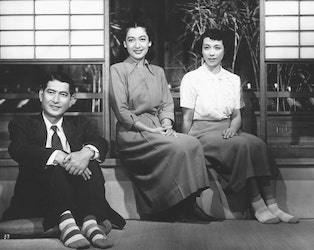 When family, friends, and colleagues pressure Noriko – played with enigmatic brilliance by Setsuko Hara (Tokyo Story) – to settle down and find a husband, they provoke a surprising decision with wide-reaching consequences. Happily single at the age of twenty-eight, Noriko still lives at home with her parents, along with her disapproving older brother, his wife, and their two young boys. Noriko and her remaining singleton friends, all carefree women in their late 20s, don’t seem particularly eager to marry, even as the other members of the household make it their business to find her a suitable match. An acutely observed ensemble piece, with a plot straight from the pages of Jane Austen, Ozu’s Early Summer presents the intricacies and contradictions of post-war Japanese society, as one generation gives way to the next.