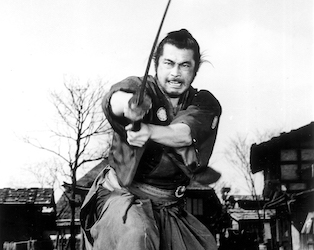 Yojimbo is the story of Sanjuro, a samurai in nineteenth-century Japan who drifts into a rural town and learns from the innkeeper that the town is divided between two gangs. He proceeds to play one side off against the other, but his activities are curtailed by the arrival of Unosuke, a shrewd and ruthless man – the son of one of the gangsters. Events spiral into violence and the samurai must choose a side. Akira Kurosawa’s classic samurai film has been a fount of inspiration, having been remade at least three times – as A Fistful of Dollars, Last Man Standing and Coyote Moon. It’s also paid homage to (or spoofed) in films ranging from Star Wars to Raiders of the Lost Ark, Miller’s Crossing and Mars Attacks!