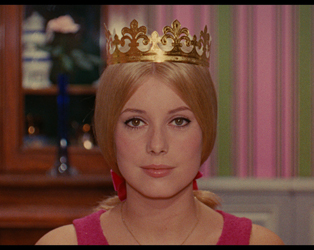 Four new releases arrive at the IFI on Friday December 20th 2019, including two classics back on the big screen and returning favourites from earlier in 2019: Bait, Buddies, Miles Davis: Birth of the Cool and The Umbrellas of Cherbourg.

“It’s a genuine modern masterpiece, which establishes Jenkin as one of the most arresting and intriguing British film-makers of his generation.”
5/5 – Observer

“In one of the most extraordinary movie experiences of the year, this Cornish-set drama unfolds in scratchy monochrome and jumpy, jarring shots, mostly featuring weather-beaten fishermen, and lobster pots, and nets and boats.”
4/5 – Times

“Bait comes along to remind you that, against the monopolisation corporatisation and homogeneity of the contemporary film industry, cinema can still be magic and light”
5/5 – Irish Times

“Strange, spellbinding and timely. One of the most thrillingly original British films in years.”
4/5 – Little White Lies

“It may look like it was made on a shoestring 50 years ago, but this abrasive seaside parable is a quietly thrilling piece of modern filmmaking.”
4/5 – Time Out

BUDDIES
“Shot on 16mm film in nine days, Buddies was the first, and arguably still the best, to tackle the Aids crisis. It remains a tender, angry, funny and urgent film, an intimate and beautifully-performed two-hander that, even on a shoestring production budget, allows for rage at Reaganite indifference and an almost unbearably poignant fantasy beach sequence.”
4/5 – Irish Times

“Offers a moving reminder of a time that seems both immensely far away and like yesterday.”
4/5 – Guardian

“It’s a film full of compassion yet miraculously free of self-pity.”
4/5 – Financial Times

“Thirty-three years after its initial release, the film remains as affecting as ever.”
Village Voice

MILES DAVIS: BIRTH OF THE COOL
“A gossipy and very musical primer on Davis, who is, needless to say (though it is said and said), among the giants of jazz.”
Wall Street Journal

“You’ll want to listen to Miles’ music after watching the film and, when you do, you might feel it a little deeper.”
LA Times

“If you’re a Miles Davis fanatic from way back and think you already know everything about him, the movie, with its sharply edited interviews and stunning archival reach, fills in nuances of the man that feel fresh and new.”
Variety

“An excellent primer from a dependable chronicler of African-American culture.”
Hollywood Reporter

THE UMBRELLAS OF CHERBOURG
“It continues to charm and delight for the same reasons it did back in 1964.”
LA Times

“It is a small picture, a boutique musical. But it’s lovely.”
4/4 – Chicago Tribune

“Seemingly banal and sentimental on the surface, [director Jacques] Demy has avoided these aspects by tasteful handling and the right balance in emotion, compassion and narrative.”
Variety

“Umbrellas makes escapist play with the stuff of kitchen-sink social realism.”
Time Out

“The Umbrellas of Cherbourg has stood the test of time as beautifully as Deneuve and seems likely to enchant future generations as fully as it has audiences over the past four decades.”
LA Times

“A choreography of the everyday timed to Demy’s floating long takes and Michel Legrand’s at turns jaunty and lachrymose score.”
Village Voice