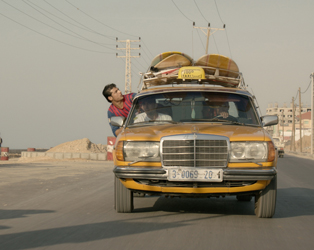 Festival President and Oscar-nominated filmmaker Jim Sheridan and Festival Director Zahara Moufid’s fourth Dublin Arabic Film Festival (DAFF) will open on Friday, October 6th at the Irish Film Institute, in Dublin’s Temple Bar. The festival, which has been developed in partnership with the IFI, is proudly presented by Dubai Duty Free.

This year’s festival includes five films which be shown at the IFI from Friday, October 6th. Films showing at the IFI include opening film Solitaire; Tramontane; Gaza Surf Club; Ali, The Goat and Ibrahim; and Beauty and the Dogs.

Jim Sheridan commented, ‘Last year’s edition boasted sell out screenings at the IFI, and we hope that DAFF goes some way to meeting the clear demand that exists for the cinema of the Arabic world. DAFF represents the best of contemporary Arabic cinema and provides unique perspectives on Arab people, culture and politics. I feel this year’s diverse selection of films gives valuable insight into the beauty and complexity of these extraordinary countries.’

The festival opens with a special screening of Sophie Boutras’s Solitaire, a charming Lebanese comedy of manners. Therese, the wife of the mayor of a Lebanese village, is preparing to meet her daughter’s suitor and family, who are, unbeknownst to Theresa, Syrian. Therese still mourns for her brother who was killed in a Syrian bombing some twenty years ago, and has been outspoken in her prejudice towards the neighbouring country ever since. Her prejudices will, however, be confronted over an exceedingly uncomfortable dinner party.

Ross Keane, the Director of the IFI, said, ‘We’re delighted to be partnering once again this year with the Dublin Arabic Film Festival after hugely successful events in 2015 and 2016. This partnership highlights the IFI’s strategic commitment to deliver film programmes from all around the world with a variety of voices, genders, and cultures.’

Colm McLoughlin, the Executive Vice Chairman and CEO of Presenting Sponsor, Dubai Duty Free said, ‘We are very pleased and proud to be the presenting sponsor of the Dublin Arabic Film Festival. Through our involvement with the Dubai International Film Festival we have seen that film has an ability to share culture, ideas, experiences in a very human way. Huge congratulations to Jim Sheridan and Zahara Moufid on the festival; the choice of films is really interesting and we are sure that Irish audiences will be enthralled, entertained and inspired.’

The Chairman of the Arab-Irish Chamber of Commerce, Joe Geoghegan, one of the festival’s main sponsors, expressed delight with this year’s programme and commented that the event has now become established in the annual calendar of cultural festivals in Dublin which promotes Arab-Irish understanding and cross-cultural communication in an effective and memorable way.

DAFF, presented by Dubai Duty Free, runs from the 6th to 8th of October 2017 at the Irish Film Institute. Click here for more information.