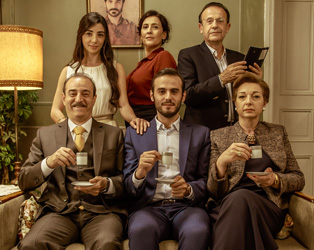 The Guess Who’s Coming to Dinner template works to winning effect in Sophie Boutros’ comedy-drama that casts a shrewd eye over the tensions between Syria and Lebanon.

Therese, the wife of the mayor of a Lebanese village, is preparing to meet her daughter’s suitor and family, who are, unbeknownst to Theresa, Syrian. Therese still mourns for her brother who was killed in a Syrian bombing some twenty years ago and has been outspoken in her prejudice towards the neighbouring country ever since. Her prejudices will, however, be confronted over an exceedingly uncomfortable dinner party.

The film is screening as part of the Dublin Arabic Film Festival 2017.