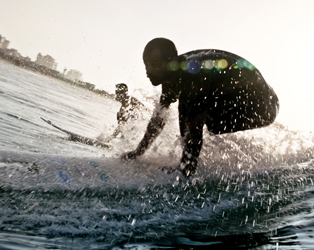 Despite the harsh conditions endured by the population of Gaza, everyday life continues. As a result of the restrictions placed upon them, the younger generation must be inventive in finding physical outlets and creating entertainment.

For one small group, including 15-year-old Sabah, who learned the sport as a girl, but is now no longer allowed to practice in public, relief comes from surfing the Mediterranean, on surfboards gathered with great difficulty. Although the film celebrates this group, the backdrop against which it is set infuses it with an undeniable melancholy.