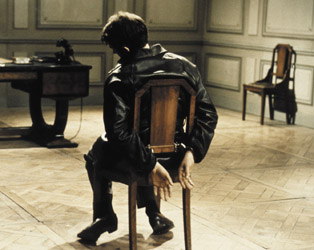 In 2017, the Irish Film Institute celebrates 100 years since the birth of acclaimed French filmmaker Jean-Pierre Melville with a programme of some of his greatest films.

Taking place between November 18th and 26th, as part of the IFI French Film Festival 2017, these films represent a swathe of his work, covering more than 20 years from just after World War II to a few years short of his untimely death in 1973 at the age of 55.

His style has influenced legions of filmmakers over the years, including the French New Wave, Michael Mann, Quentin Tarantino and John Woo. Come see the original master at work.

THE SILENCE OF THE SEA
Nov 18th – 13.30
Shot by Henri Decaë, ‘cameraman to the Nouvelle Vague’, Melville’s first feature is one of a trilogy of wartime stories of the occupation and resistance in France. Staged mainly in one room in a rural house, an old man and his niece (Nicole Stéphane) are forced to provide lodgings for a German officer (Howard Vernon), a musician, and a sensitive and cultured idealist. The weapon of resistance they use is complete silence. Includes intro by Dr Douglas Smith, Senior Lecturer, School of Languages, Cultures and Linguistics, UCD + a screening will be preceded by Melville’s short 24 Hours in the Life of a Clown.

BOB THE GAMBLER
Nov 19th – 13.00
Melville’s most memorable character, Bob Montagné, with his silver-hair, trench-coat and Bogartesque style, is an aging thief-turned-gambler who sets out to bring off one last coup, a heist on the Deauville casino. Inspired in part by John Huston’s The Asphalt Jungle, it reflects Melville’s love for Hollywood gangster movies, with the themes of friendship, loyalty, betrayal and solitude recurring in much of his work. Includes intro by Dr Douglas Smith, Senior Lecturer, School of Languages, Cultures and Linguistics, UCD.

ARMY OF SHADOWS
Nov 26th  – 13.10
Made between Le Samouraï and The Red Circle, Melville’s breathtaking masterpiece completed his triptych about the Occupation and Resistance. An adaptation of Josep Kessel’s novel, Melville draws on his own experience of the Occupation in this exquisite suspense epic. Dark tones of blue-grey dominate its morbid narrative filled with betrayal and death, plunging us into the intense, internal world of a small group of resistance fighters (including Simone Signoret, Lino Ventura, and Serge Reggiani). Dr Tony Tracy, Huston School of Film & Digital Media, NUI Galway, will introduce this screening.

Tickets for these screenings are priced at €7 and on sale now.