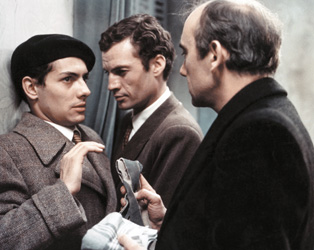 Made between Le Samouraï and The Red Circle, Melville’s breathtaking masterpiece completed his triptych about the Occupation and Resistance. An adaptation of Josep Kessel’s novel, Melville draws on his own experience of the Occupation in this exquisite suspense epic. Dark tones of blue-grey dominate its morbid narrative filled with betrayal and death, plunging us into the intense, internal world of a small group of resistance fighters (including Simone Signoret, Lino Ventura, and Serge Reggiani).