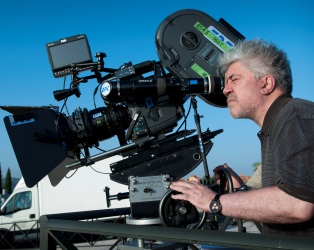 We are delighted to host a preview of Pedro Almodóvar’s new film I’m So Excited followed by a satellite Q&A with the director on April 23rd at 18.30. I’m So Excited opens at the IFI on May 3rd.

No Spanish filmmaker since Luis Buñuel has achieved the same level of universal recognition and acclaim as Pedro Almodóvar. Following the death of Franco in 1975, and the end of a dictatorship nearly four decades long, the Movida Madrileña heralded a counter-cultural renaissance celebrating hedonism, transgression, and above all, freedom of expression.

Spearheading the cinematic arm of the movement was Almodóvar, whose early films delineated the style and themes that have remained evident throughout his career. However, whereas those first features were riotous, slapdash, and frequently gaudy, later work showed a significant maturing of approach, adding a much more satisfying depth to the director’s tales of fluid or ambiguous sexual identity, the urban environment, familial relationships, religion, death, complicated romances, and, especially, interactions between strong, capricious women and the worlds they inhabit.

Almodóvar’s sense of mischief extends to his playful mixing of genres, and there are touches of his trademark wit in even his most serious films. Feverishly creative and consistently impressive, Almodóvar is a major figure in European cinema, one of those filmmakers who can be identified as readily from one of his films as he can from his distinctive appearance, topped by that fluffy shock of hair.

Introduction by Kevin Coyne. Notes on individual films by Alice Butler and Kevin Coyne, as credited.