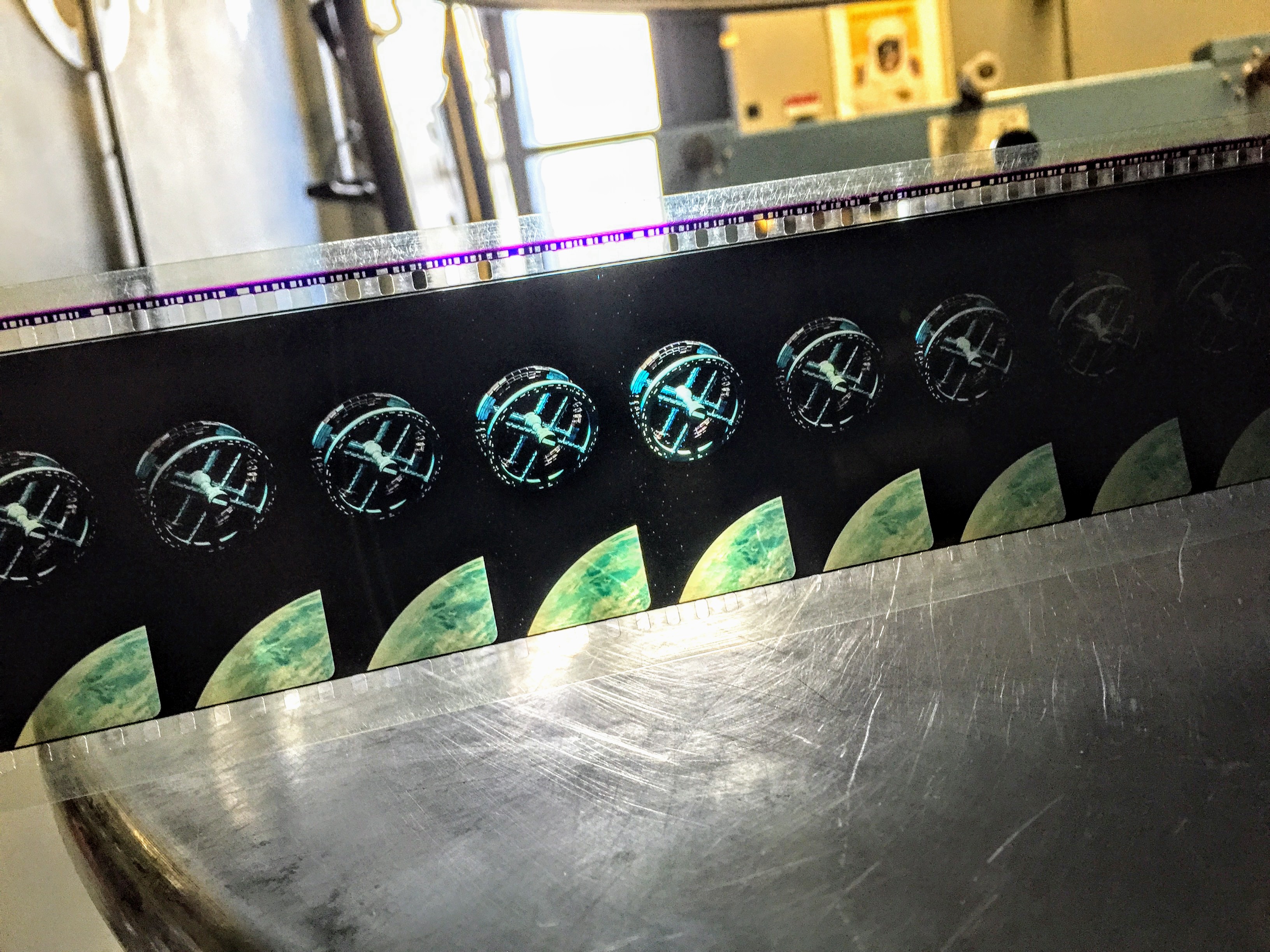 70MM BREAKING DOWN THE DIFFERENCES

Modern 70mm prints generally have their sound encoded on a single DTS (DATASAT) track printed on one side of the film stock.  The actual sound itself is on a CD type disc (Note: the discs are NOT actually CDs and won’t play in any CD or DVD player. They are full of data) which is ingested into the sound processor.  When the film runs through the DTS sound head (see photo below), the codes printed on the film stock tell the processor exactly what sound to play and what speaker to send it to.

Before the arrival of digital encoding, 70mm prints used a double magnetic track (or mag track) printed on both sides – of one side – of the film stock.  These tracks are read through an elaborate sound head (see photo below), which requires quite a bit of practice (and preferably small fingers!) to get right. If the looping is not correct here, you’ll likely hear a warbling in the dialogue.

The sound mix, whether coming from the Mag Track or the DTS track will be exactly the same.  How the sound is mixed are creative decisions made by the film’s director at the time. The digital system is simpler and more efficient, allowing for far less sound drop outs or potential errors, so you get a much cleaner delivery of the same sound mix.

BREAKING DOWN THE DIFFERENCES

The Sound of Music print that just arrived was only manufactured in February 2018. We will be cleaning the print with a chemical bath before it hits the screen, to remove as much dust as it may have accumulated in running before it got to us.  We try do this with every 70mm print we receive.  For some cinemas, a bonus with The Sound of Music is that it utilizes an extra two channels in its sound mix of 4, bumping it up to 6.  But these channels can only be read by projectors and processors with a capability called “Special Venue” (this term relates back to the old 70mm roadshow days back in the sixties).  Good news! The IFI is a “Special Venue”, we have the technology, so you will be getting the full 6 speaker Von Trapp experience!  The Sound of Music opens Friday June 15th.

Based on our experience with the Aliens 70mm print (playing on July 21st) when it ran at the IFI some years ago, the film will have a 6 channel Mag Track soundtrack, as the print was manufactured at the time of the movie’s release in 1986, many years before digital came along.  As this is James Cameron we are talking about, the Aliens sound mix is particularly excellent and  famous for its aggressiveness and all round use of bass – which anybody who saw it here in 2011 will remember!  We have since installed a new subwoofer, so…good luck everybody!  As of writing we don’t have the print in house yet, so we can’t confirm it’s the exact same one from our previous shows or attest to its condition (either way it will be from 1986 or around that period).  Once its arrived and has been tested we can fill you in a lot more.

The new “unrestored” 2001 coming up from August 10th will have a DTS encoded soundtrack which duplicates the film’s mix from 1968.  As far as I am aware this has always been the case throughout all its re-issues, whether on Mag Track or Digital. The last time we projected the film, the sound was also DTS (see photo below), so it should sound exactly the same, ie a fantastic 8 channels, as 2001 also utilizes “Special Venue” capabilities, in this case going up from 6 to 8 speakers. 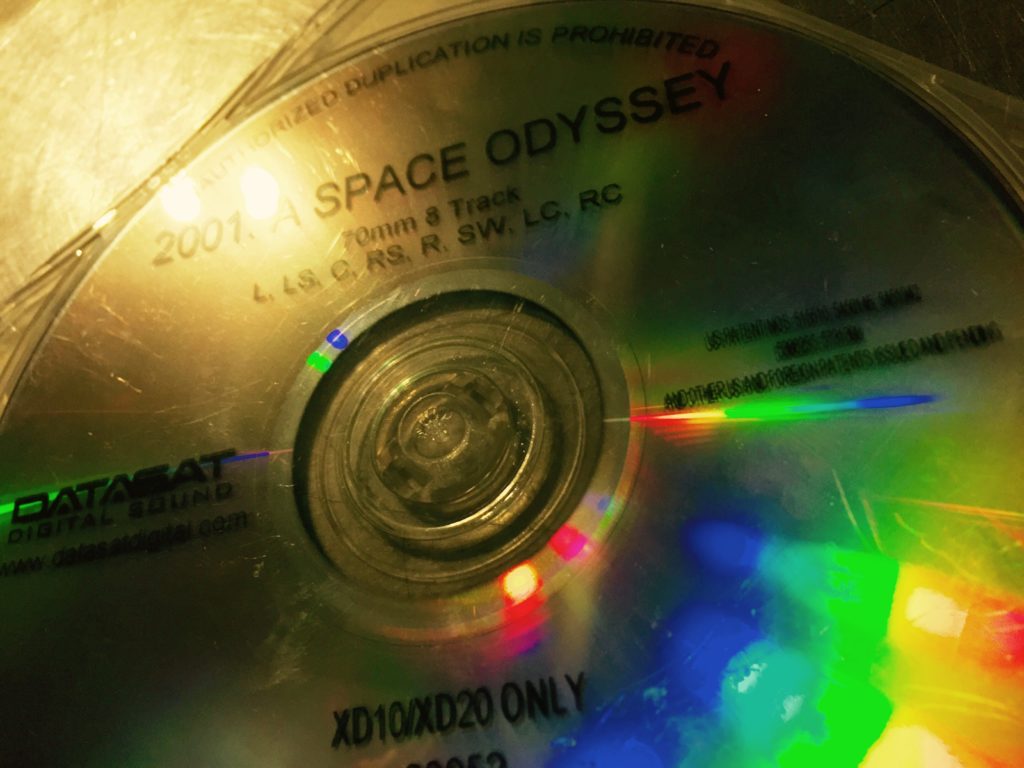 The way this print will differ from the last time is in the colour timing.  The image will apparently reflect its original 1968 look.  I am very curious myself to see how different it is from are previous experience.  Note: the recent 4K re-release of the film on DCP and Bluray retains the more familiar modern colour timing. So the 70mm will actually be a fresh experience and a chance to see how it looked when it was first shown to the world.  The 4K release was supervised by Leon Vitali, subject of the recent IFI documentary Filmworker and the 70mm was supervised by uber-fan Christopher Nolan, director of last year’s amazing 70mm Dunkirk. 2001 opens on August 10th. 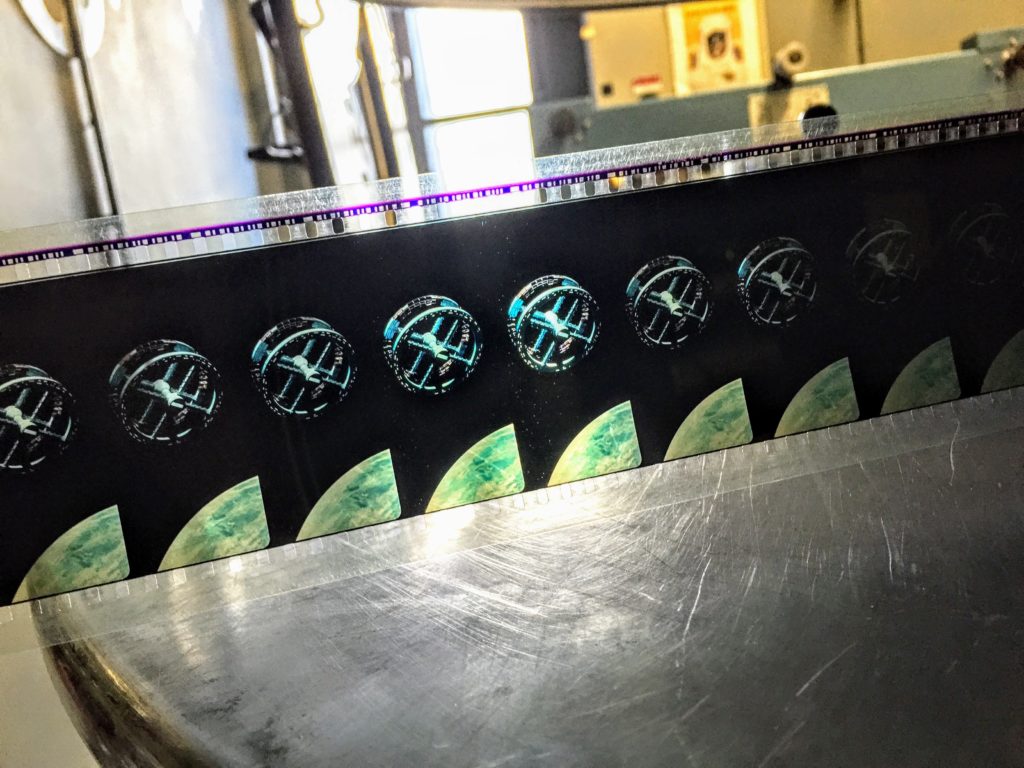 The Irish Film Institute 70mm summer titles The Sound of Music, Aliens and 2001: A Space Odyssey are all booking now. Click here for details.