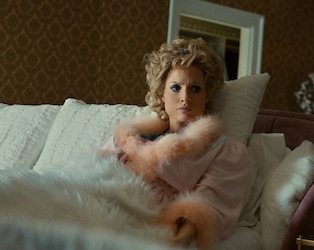 This week’s new releases at the Irish Film Institute on Friday, February 4th 2022 are The Eyes of Tammy Faye, The Souvenir: Part II, and Brian Wilson: Long Promised Road. Read on for a selection of reviews or pop in to make up your own mind!

THE EYES OF TAMMY FAYE

“Jessica Chastain… gives a hilarious turn as Tammy Faye: like Tammy Wynette with a bit of Nancy Reagan and Eva Perón.”
4/5 – Guardian

“A riveting, unleashed and award-worthy performance from Jessica Chastain, playing a central character full of tensions and contradictions, is reason enough to see this film.”
4/5 – Times (UK)

“Hogg has created her own universe and explored it with relentless vigour. Few final shots have so satisfactorily summed up such a magnum opus.”
5/5 – Irish Times

“Joanna Hogg has given us an amazingly luminous self-portrait of the film-maker as a young woman: metatextual, confessional and autobiographical.”
5/5 – Guardian

“Searching, leftfield, strange and imaginative — you could call The Souvenir Part II all those things. It’s also sensitive and funny.”
5/5 – Time Out

“Kindly film-making that puts Wilson at ease, and allows for some rare, unusual portraiture of the Beach Boys mastermind.”
Guardian

“In his interactions with his band, with Fine, with his family, the documentary is a portrait of friendship and love as much as it’s about music.”
Hollywood Reporter