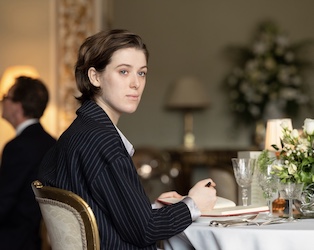 In the aftermath of her tumultuous relationship with the charismatic yet fatally flawed and manipulative Anthony, Julie (Honor Swinton Byrne) begins to untangle her complex feeling for him, sorting fact from his elaborately constructed fiction. Picking up immediately where the first film left off, a devastated Julie begins to conceive of a graduation film that will dissect the doomed love affair, probing the character of the mysterious, heroin-addicted Anthony and her attraction to him in a meta-textual, self-reflexive manner. With an outstanding cast that also includes Richard Ayoade, Charlie Heaton, Joe Alwyn and Tilda Swinton, The Souvenir: Part 2, Joanna Hogg’s shimmering story of first love and a woman’s formative years, is a portrait of the artist that transcends the halting particulars of everyday life, and is a singular, alchemic blending of memoir and fantasy.