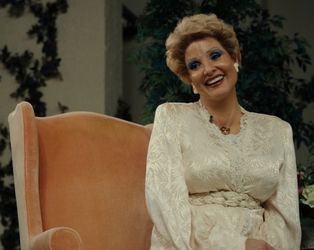 In late-1980s America, the phenomenon of televangelism, wherein hugely popular ministers preached Christianity to rapt audiences through the television screen, was rocked by a series of scandals affecting its leading figures. Among the most egregious of these was the case of Jim (Andrew Garfield) and Tammy Faye Bakker (Jessica Chastain, who also produces), where accusations of sexual misconduct against Jim led to the discovery of massive financial irregularities at the couple’s Praise The Lord network. Although much about televangelism easily provokes cynicism and distrust, Michael Showalter’s biopic is to be commended for taking a more balanced approach that also acknowledges the ministry’s positive activities, while Chastain gives a powerhouse performance as a deeply eccentric, but ultimately endearing, woman of faith whose compassionate outreach to LGBT audiences during the AIDS epidemic was typical of an outlook often very much at odds with her peers.