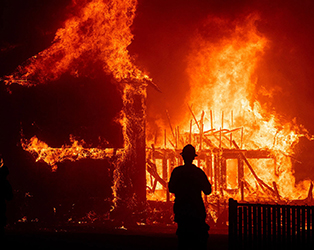 August 25th 2020: The Irish Film Institute (IFI) is proud to announce the programme for the 18th IFI Documentary Festival. For the first time ever, the festival will take place at both the IFI’s landmark building in Temple Bar and nationwide on the IFI’s new video-on-demand platform, IFI@Home. Tickets for Temple Bar screenings are now available from www.ifi.ie, while online screenings can now be pre-ordered from www.ifihome.ie.

The festival will open on Monday, September 21st with the Irish premiere of Oscar winner Ron Howard’s Rebuilding Paradise. The film, which focuses on the devastating 2018 Camp Fire that almost wiped out the Californian town of Paradise, will be followed by an exclusive virtual Q&A with Howard and Michelle John and Woody Culleton who both feature in the film. The festival will close on Sunday 27th with a cinema-only screening of Michael McCormack’s inspirational Breaking Out, the story of remarkable musician and singer, the late Fergus O’Farrell.

Speaking about this year’s festival, IFI Ross Keane said, ‘We are hugely excited about the launch of this year’s week-long IFI Documentary Festival and are especially delighted that it will be available both in the newly reopened IFI in Temple Bar, and also nationwide for the first time via IFI@Home. As usual, the festival has a wonderful mix of timely and fascinating films that will appeal to audiences everywhere, and we look forward welcoming filmmakers back to the IFI for the many Q&As and discussions that will take place throughout the week.‘

Other Irish films to feature as part of this year’s selection include two World Premieres: Gillian Marsh’s charming The Funeral Director, featuring Sligo undertaker David McGowan and his pivotal role in his local community; and Christopher Kepple’s A Call to Arts, focusing on the life and artistic legacy of artist Helen Hooker and her husband, Irish revolutionary, and later historian, Ernie O’Malley. Also showing will be the Irish Premiere of Outcry and Whisper, a new film from directors Wen Hai, Zeng Jinyan and Trish McAdam which looks at women’s struggle in the private and public spheres in both China and Hong Kong. Pat Collins’s portrait of the renowned American folklorist and ethnologist, Henry Glassie: Field Work, will also screen, as will Gretta Ohle’s Tomorrow is Saturday, an intimate portrait of artist Sean Hillen who was diagnosed with Asperger’s in his late 50s. Dublin-based director Nino Tropiano’s Ndoto Ya Samira (Samira’s Dream) follows an independent young Zanzibari woman whose dreams of becoming a primary school teacher are challenged by wider cultural obligations.

Q&As for Breaking Out, The Funeral Director, Henry Glassie: Field Work, and Tomorrow Is Saturday will all take place in the IFI in Temple Bar, with virtual Q&As available online for Samira’s Dream, Outcry and Whisper, and A Call to Arts.

In this election year, topical new films from the United States have a notable presence. Deirdre Fishel’s Women in Blue focuses on Minneapolis’s first female police chief, Janée Harteau, as she tries to reform the organisation; the Minneapolis Police Department came to worldwide attention earlier this year following the death of George Floyd. Davy Rothbart’s 17 Blocks follows two decades in the life of a family in one of America’s most dangerous neighbourhoods, situated just 17 blocks from the US Capitol. As transgender rights increasingly come under pressure in the US, Elegance Bratton’s Pier Kids follows a number of transgender people of colour at Christopher Street Pier in New York City.

Incredible life stories from across the world also feature heavily: Maite Alberdi’sThe Mole Agent is the charming and irreverent story of an elderly man asked to go undercover in a Chilean nursing home; Benjamin Ree’s The Painter and the Thief examines the unlikely friendship between a Norwegian artist and the thief who stole one of her paintings from an Oslo art gallery; Gentle Warriors, from director Marija Stonyte, follows three Lithuanian girls who voluntarily enlist in the country’s male-dominated military. Two films, Love Child and Stray, focus on two very different experiences of life in Istanbul, one from the standpoint of a migrant couple who find themselves in limbo, and the other from the point of view of three stray dogs wandering the streets for food and shelter.

Elsewhere in the programme, director Ric Burns gets up close and personal with renowned neurologist Oliver Sacks in Oliver Sacks: His Own Life, a series of interviews following Sacks’s diagnosis with terminal cancer in 2015; Iryna Tsilyk’s turns her camera on a film-obsessed family in Ukraine for The Earth is as Blue as an Orange; Réka Szabó’s intensely moving The Euphoria of Being features 90-year-old Holocaust survivor Éva Fahidi as she prepares a dance recital about her life; Martin Vetter is the first filmmaker to get exclusive behind-the-scenes access at the World Economic Forum in Davos for The Forum; and Britni Harris’s Goff looks at the oft-forgotten legacy of one of America’s great 20th century architects, Bruce Goff.

Tickets for the in-person screenings in Temple Bar are available online from www.ifi.ie/docfest.

For more information on interview availability and high-res images, please contact Frances Wilde at the IFI Press Office (01 679 5744) or fwilde@irishfilm.ie.

The IFI acknowledges the financial support of the Arts Council. The IFI Documentary Festival is supported by RTÉ Supporting the Arts.