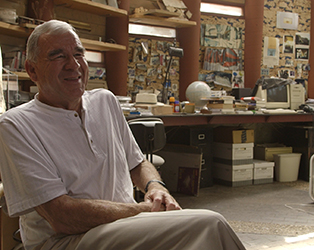 To pre-order GOFF, click here. The film will be available to view on IFI@Home from Thursday, September 24th at 18.00.

Bruce Goff was one of the greatest American architects of the 20th century, but his experimental designs were not always well received in the conservative landscape in which he worked. His unconventional perspective challenged stigmas about the Midwest’s inability to produce innovative work. A peer to Frank Lloyd Wright, his work had a profound influence on the next generation of architects, including Philip Johnson and Frank Gehry. However, Goff’s willingness to explore unprecedented forms made him a polarising figure, and many of his innovative buildings have been left to decay or have been forgotten altogether. Britni Harris’s film explores the life of an iconoclast and chronicles the events that lead to the destruction and renewed interest of his memory and dwellings.