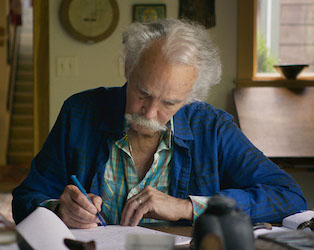 To pre-order Henry Glassie: Field Work, click here. The film will be available to view on IFI@Home from 18.00 to 23.59 on Saturday, September 26th.

Pat Collins here follows Song of Granite, with Henry Glassie: Field Work, a magisterial portrait of the renowned American folklorist and ethnologist Henry Glassie, now in his seventies. The film is an intricate exposition of Glassie’s life’s work and a vehicle for Collin’s trademark perspicacity and keen eye for the smallest details which yield deep significance. The rituals and rhythms of working artists across Brazil, Turkey, North Carolina and Ireland are recorded in languorously paced sequences which mirror the real time process of the crafting of the work.

Glassie’s subject is folklore but his abiding love for the people who create it resonates throughout the film. “I don’t study people. I stand with people and I study the things they create.”

This screening will be followed by a Q&A with the filmmakers, hosted by Sheila de Courcy.