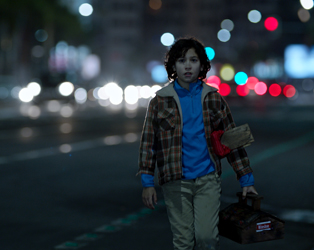 The sixth annual Dublin Arabic Film Festival (DAFF), curated by Oscar-nominated filmmaker Jim Sheridan and Festival Director Zahara Moufid, will open on Friday, October 4th at the Irish Film Institute (IFI) in Dublin’s Temple Bar. The festival, which runs until Sunday, October 6th, has been developed in partnership with the IFI and is again presented by Dubai Duty Free.

This year, DAFF is especially proud to announce that actor Liam Cunningham (Game of Thrones, Hunger, The Wind That Shakes the Barley) will be the event’s inaugural Festival Patron.

This year’s festival will include five films at the IFI including the curtain-raiser The Reports on Sarah and Saleem, Muayad Alayan’s drama centred on the clandestine affair between a Palestinian deliveryman and an Israeli cafe owner. Stephanie Brockhaus and Andreas Wolff’s documentary about Saudi poet Hissa Hilal, The Poetess, and Soudade Kaadan’s Syrian drama The Day I Lost My Shadow will screen on Saturday 5th. The final two festival films, The Tower from director Mats Grorud and Nour Eddine Lakhmari’s Burnout, will hit the big screen on Sunday 6th; Burnout will be followed by a Q&A with the film’s director Nour Eddine Lakhmari and producer Khadija Alami. A free screening of Nora Twomey’s Oscar-nominated animation The Breadwinner will screen at Chester Beatty library at 14.00 on Saturday 5th.

DAFF has proved to be a great success since its inaugural year in 2014 when movie great Omar Sharif opened the festival. Over the past four years, DAFF has attracted dedicated flim fans, directors and actors from all over the world including Dubai, Egypt and Morocco.

Commenting on this year’s programme, Festival President Jim Sheridan, added, “This year there is a common theme of displacement which runs through many of the films we have selected. We live in strange times, where it quite often seems that society is becoming less tolerant of different cultures. This festival aims to embrace difference and to encourage tolerance. It further aims to create greater understanding of the Arab world, its people and the wonderful films that are currently being made in the region. It is also a huge honour for us that two Moroccan filmmakers, director, Nour Eddine Lakhmari and producer, Khadija, Alami will also join us for the festival bringing it to a close on Sunday, 6th October. I also want to take use this opportunity to thank Zahara Moufid who co-curated this festival for her great work. We hope the audiences will enjoy the choice of the movies as much as we do.”

Colm McLoughlin, Executive Vice Chairman and CEO of Dubai Duty Free, the presenting sponsor of DAFF said, “Dubai Duty Free is happy to be the presenting sponsor of the Dublin Arabic Film Festival once again. We first started our sponsorship of the festival in 2014. That year, the legendary Omar Sharif was the guest of honour and helped to promote the great work that Arab film makers and actors are doing all around the world. This festival has continued to promote Arab culture through the medium of film and fits with our sponsorship portfolio of the arts and cultural events. We wish the curators of the festival, Zahara Moufid and Jim Sheridan the very best of luck in their endeavous and look forward to yet another great festival of film and culture.”

Speaking about the festival, IFI Director Ross Keane said, “The IFI is proud to partner with the Dublin Arabic Film Festival for its sixth edition. The programme once again showcases the strong and diverse output of Middle Eastern and North African cinemas, exploring a wide range of socially and culturally significant stories and experiences. The festival continues to play a hugely important role in our annual exhibition calendar, and we look forward to welcoming the festival and Liam Cunningham, its inaugural Patron, to the IFI this October.”

Featuring stand-out performances from Adeeb Safadi and Sivane Kretchner, The Reports on Sarah and Saleem focuses on a clandestine affair between a Palestinian deliveryman and an Israeli café owner, both seeking to escape the pressures of their respective marriages. The two live on opposite sides of Jerusalem, and the risk of exposure comes at a great cost. When a late-night tryst in Bethlehem goes awry, the repercussions turn their romance into a minor international crisis involving the secret police, forced confessions and Saleem’s arrest in Israel under false charges.

Saudi poetess Hissa Hilal made headlines around the world as the first woman to ever make it to the final of Million’s Poet, an Abu-Dhabi based multi-million dollar reality television show. It is the Arab world’s biggest poetry competition, and is dominated by men. In her poems, Hissa criticises the patriarchal Arab society and she attacks one of the most notorious Saudi clerics for his extremist fatwas, live, in front of 75 million viewers. Stephanie Brockhaus and Andreas Wolff’s The Poetess tells the story of a woman who grabs the opportunity to speak up against religious extremism and stand up for a peaceful Islam.

Set in 2012 at the beginning of the war in Syria, The Day I Lost My Shadow sees a young pharmacist in Damascus struggling to give her son as normal a childhood as possible. With water, gas and electricity in short supply, Sana sets off on a search that becomes increasingly dangerous when she encounters both her worst fears and the kindness of strangers.

Animated film The Tower centres on Wardi, an eleven-year-old Palestinian girl, living with her whole family in the refugee camp where she was born. Her beloved great-grandfather Sidi was one of the first people to settle in the camp after being chased from his home back in 1948. The day Sidi gives her the key to his old house back in Galilee, she fears he may have lost hope of someday going home. Wardi goes looking for his lost hope around the camp, collecting her family’s testimonies along the way,

The festival’s closing film, Nour Eddine Lakhmari’s Burnout, examines the interconnected destinies of three disparate characters in the Moroccan metropolis of Casablanca. A thirteen-year-old shoe-shine boy dreams of buying a prosthesis for his one-legged mother; a middle-aged entrepreneur wants to free himself from the obsessions of his late father; and a 25-year old hospital intern leads a dangerous double life as an escort for wealthy clients. The screening of Burnout will be followed by a Q&A with the film’s director Nour Eddine Lakhmari and producer Khadija Alami.

For further press information or photography, please contact Aileen O’Brien at O’Brien PR on (045) 407017,  Aileen mobile (086) 8403624, aileen@obrienpr.com. The Opening Night reception at the Irish Film Institute is open to press, however RSVPs are essential.  Please contact O’Brien PR by responding to events@obrienpr.com

For any IFI media requests, please contact Stephen Boylan on (01) 612 9448 or email sboylan@irishfilm.ie

The fifth event of its kind in Ireland, DAFF, Presented by Dubai Duty Free will take place at The Irish Film Institute and the Chester Beatty Library 4-6th October, Dublin.  With festival director Zahara Moufid at the helm and Oscar nominated movie producer Jim Sheridan serving as Festival President DAFF, Presented by Dubai Duty Free, celebrates some of the best feature films the Arab world has to offer.  The very first festival featured a visit to Ireland by legendary movie icon Omar Sharif in 2014. For more details see  www.dublinarabicfilmfestival.ie

The Irish Film Institute is Ireland’s national cultural institution for film. It provides audiences throughout Ireland with access to the finest independent, Irish and international cinema; it preserves and promotes Ireland’s moving image heritage through the IFI Irish Film Archive, and provides opportunities for audiences of all ages and backgrounds to learn and critically engage with film. IFI is principally funded by the Arts Council.

Dubai Duty Free which was founded in 1983, recorded first-year sales of US$20, has grown into one of the biggest travel retail operators in the world with sales turnover of US$1.93 billion in 2017.

Now employing over 6,000 people, the operation has consistently raised the benchmark for airport retailing and it continues to grow. Dubai Duty Free currently operates some 38,000sqm of retail space at Dubai International Airport and 2,500 sqm at Al Maktoum International that will grow in line with the massive development plans of Dubai South, which ultimately cover some 80,000sqm of retail.

In addition to its retail operation, Dubai Duty Free operates a Leisure Division which includes The Irish Village, both in Garhoud and Riverland Dubai, The Century Village, Dubai Duty Free Tennis Stadium and The Jumeirah Creekside Hotel.

To date, Dubai Duty Free has received 600 awards including the Frontier Awards for ‘Airport Retailer of the Year in Single Location’, which was won by the operation for the eighth time.

Dubai Duty Free’s Executive Vice Chairman and CEO, Colm McLoughlin was also presented with several awards including the “Irish Presidential Distinguished Service Award” and the CEO Middle East Awards for “Retail CEO of the Year”. In addition, he was conferred with an Honorary Doctorate of the University (DUniv) by the Middlesex University Dubai, for his contribution to UAE society and outstanding service to the aviation sector as a key player in the region’s retail sector for 34 years.