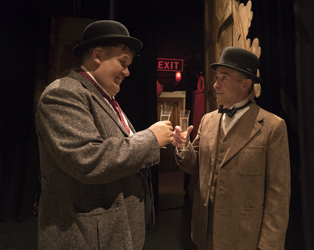 STAN & OLLIE
“A delightful tribute to twin phenomena so burned into collective consciousness that we need to be reminded they once didn’t exist. Domestic readers will particularly savour the later scenes in a welcoming Ireland.”
4/5 – Irish Times

“This beautiful story about friendship, forgiveness and why the show must go on turns out to be the best film Laurel & Hardy never made.”
5/5 – RTE

“Coogan inhabits the character beautifully, catching Laurel’s quietness and physical grace, but also the steely inner resolve that got him to the top in the first place.”
4/5 – Irish Independent

“It’s a love song played in a minor key, and it leaves an unexpectedly lingering impression.”
4/5 – Time Out

“Steve Coogan and John C. Reilly deliver dynamite performances that capture the expressions and physicality of the star comedians without ever descending into caricature.”
New York Times

COLETTE
“Knightley, as the titular French writer, has seldom been better or more dazzling”
4/5 – Irish Times

“A radiant, riveting Keira Knightley meets every challenge the title role of French novelist Colette throws at her and turns this tale of a pioneering feminist into an exhilarating kick.”
4/5 – Rolling Stone

“At first presenting itself as a tightly corseted Big Eyes set during the Belle Époque, Colette erupts into a fun, frothy, and unmistakably feminist biopic.”
indieWire