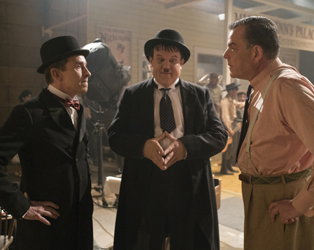 This film was released on Friday 11th January 2019 and is no longer screening.

This joy of a film follows Laurel and Hardy, two of cinema’s comedy giants, in their twilight years. On what would turn out to be their farewell tour in 1953, a series of performances in the UK and Ireland, though initially modest and met with underwhelming audiences, grows to be a success as public interest and affection is rekindled. However, behind the scenes, old resentments and health problems flare up. Steve Coogan and John C. Reilly inhabit rather than imitate the characters, while Shirley Henderson and a scene-stealing Nina Arianda form their own double-act as the pair’s wives.

A funny and genuinely heart-warming film, it will leave audiences with a smile on their faces in this perfect tribute to a beloved partnership.