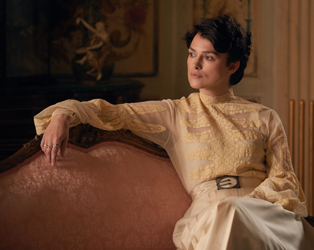 This film was released on Friday 11th  January 2019 and is no longer screening.

The Pioneering life of the titular 19th century French literary sensation is brought to the screen in handsome fashion by director Wash Westmoreland (Still Alice, 2014). Beginning in provincial

Burgundy, young Sidone-Gabrielle Colette (Keira Knightley) is betrothed to the roguish literary impresario Henry Gauthier-Villars (Dominic West), who goes by the nom de plume Willy. Whisked away to the City of Lights at the height of the Belle Époque, Willy initially encourages her writing, yet takes sole credit for the huge success of her racy Claudine series of novels. An illicit affair with American beauty Georgie offers further creative inspiration as she strives to find her voice and define her identity