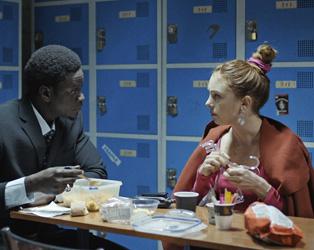 Three new films open at the IFI on Friday May 18th: Intimate documentary Filmworker about Leon Vitali, who was Stanley Kubrick’s right hand man for 20 years. The award-winning Jeune Femme starring Laetitia Dosch as a young woman trying to find her way. And Sergei Parajanov’s visually stunning The Colour of Pomengranates.

Read on for a selection of reviews, and pop in to make up your own mind!

“Jeune Femme memorably evokes the handsome jungle that is Paris, is sharply observant but never po-faced, and Laetitia Dosch is hilarious as the unhinged and almost lovable Paula”
4/5 – Irish Independent

“Laetitia Dosch is breathtakingly charismatic. You can’t take your eyes off her, even on repeat viewings”
Little White Lies

“Two mesmerising portraits for the price of one”
Times

“Filmworker is a portrait of an unsung hero, a revealing look at how Kubrick’s films were made and a psychological sketch of a would-be Da Vinci determined to keep dusting and polishing someone else’s Sistine Chapel”
Rolling Stone

“It’s a portrait of Kubrick’s right-hand man, who devoted himself to the religion of all things Kubrick, but beyond that the film has a special value: It ushers you into the world of how Kubrick put his movies together”
Variety

THE COLOUR OF POMEGRANATES
“A madly beautiful, often straight-up-bonkers meditation on the life of its eponymous Armenian-Azeri balladeer and poet”
L.A. Weekly

“It’s a strange, visionary work, highly formal and not easy of access, but compelling in a way that’s almost impossible to describe”
Chicago Reader

“Not just some mad collection of pretty pictures, but a poetic and ethnographic evocation of Armenian religion, culture and society, told through the prism of the nation’s most celebrated troubadour and his songs”
Little White Lies