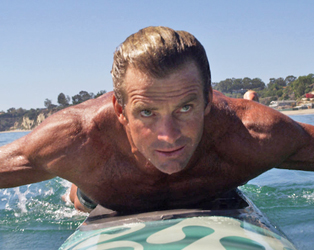 MAVERICKS: SURFING DOCS AT THE IFI

If you’re tired of the cold and feel like escaping to the warmth of beach life, the Irish Film Institute has the perfect season for you this December: screenings of three exceptional surfing documentaries on Saturday 2nd and Sunday 3rd December.

Surf films have, up to now, been relatively straightforward: good surfers, good waves and good music. Recently filmmakers have been increasingly drawn to the stories and characters that surround surfing and the IFI has selected three of the best surf films released last year to screen in a season named after the famous surfing spot in Half Moon Bay, California.

This short season will contain the Irish première of Rory Kennedy’s Take Every Wave: The Life of Laird Hamilton. The documentary charts Hamilton’s unconventional career, from his early days in Hawaii where surfing became a refuge from an abusive home to international recognition and celebrity.

Following a triumphant screening at the Dublin Arabic Film Festival in October, Gaza Surf Club will once again return to the big screen. The resilience of Gaza’s population is revealed through this documentary, which focuses on the world of 15-year-old Sabah, who learned the sport as a girl but is now no longer allowed to practice in public.

On Sunday 3rd, director Ross Whitaker will participate in a Q&A following an encore screening of Between Land and Sea. This observational feature, one of the biggest Irish films at the IFI this year, embeds itself in a community of surfers in Lahinch, Co. Clare, over the course of a sea-buffeted year and features stunning seascapes and mind-blowing surfing, going beyond the usual bluster of the typical adrenaline-fuelled surf film in an immersive portrait of a people and a place.