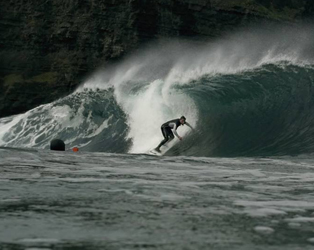 This observational feature – at times intimate, at times epic – embeds itself in a community of surfers in Lahinch, Co. Clare, following their on-and off-season lives over the course of a sea-buffeted year. The surfers have dedicated their lives to the ocean, consumed by the excitement and beauty on offer but, conscious too of economic precariouness, they lead modest lives, eschewing the luxuries of city life and engaging in sustainable agricutural projects to feed themselves and their young families.

Directed by Ross Whitaker (Saviours, Unbreakable), and featuring some of the most breath-taking seascapes, the biggest waves and the best surfers in Ireland (including a cameo by Hawaiian legend Shane Dorian), the film takes the audience beyond the bluster of the typical adrenaline- fueled surf film in an immersive and thought-provoking portrait of a people and a place.