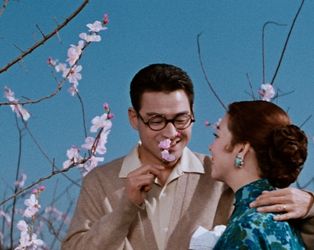 THE FILMS OF KINUYO TANAKA

Kinuyo Tanaka (1909-1977) was one of the most popular and successful stars of Japanese cinema, with more than 250 credited films to her name in a career lasting over 50 years. Although justly renowned for her acting collaborations with master filmmakers such as Yasujirõ Ozu, Kenji Mizoguchi, and Mikio Naruse, the films in this season pay tribute to her work as a director and represent a complete retrospective of her work behind the camera, a celebration of an overlooked auteur.

A pioneering figure in Japan’s post-war studio system that actively discouraged female filmmakers, Tanaka directed 6 features between 1953 and 1962 (in defiance of Mizoguchi’s expressed disapproval), sensitive portraits of Japanese women that foreground the experiences of mistresses, prostitutes, poets, heroines, and victims of social injustice, in a variety of genres, from the romantic comedy, the biopic, to the period drama. Her films emphasis the indomitable spirit of the individual and the collective power of female kinship.

The Irish Film Institute is delighted to present this complete retrospective of Kinuyo Tanaka’s directorial work, with all films presented in new 4K digital restorations.