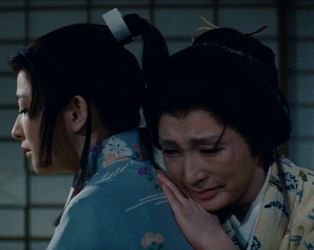 A film about the tragic love of Ogin who is the daughter of a master of the Japanese tea ceremony (Sado), Sen no Rikyu, and a Christian Samurai lord Takayama Ukon, based on a novel by Kon Toukou. Ogin marries a wealthy merchant despite being in love with Ukon. She is also asked to become a mistress of Shogun Toyotomi Hideyoshi. In order to pursue her love and fight against authority, she must make the ultimate decision. Directed by Kinuyo Tanaka, the film depicts the struggle of Ogin surviving from a female perspective and portrays the beauty of the Momoyama culture (from around year 1568 to 1600).