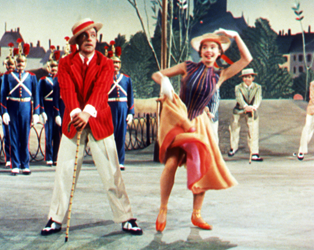 IFI PARTNERS WITH THE AUDI DUBLIN INTERNATIONAL FILM FESTIVAL THIS FEBRUARY FOR A SERIES OF SCREENINGS AND EVENTS.

February 8th 2018: IFI is proud to again partner with the Audi Dublin International Film Festival this February to bring you a series of screenings showcasing the very best of new Irish documentary filmmaking. This year’s programme also features a look at the work of Oscar-winning Irish-American production designer Cedric Gibbons, and a practical Careers in Film Day for second level students, showcasing the opportunities available in the Irish film industry.

The inaugural Careers in Film Day, which takes place on March 1st, is an innovative one-day programme of events aimed at second-level students. The day will offer insights into the diverse range of film professions, while academic staff and students from college courses will be on hand to offer guidance and advice.

Dublin-born Cedric Gibbons is the most successful art director in the history of cinema. His team at MGM shaped the sets, props and costumes for more than 1,000 films, contributing greatly to the studio’s reputation as Hollywood’s number one ‘dream factory’. He conceived the colossal sets of Ben-Hur (1925), the technicolour realm of The Wizard of Oz (1939), and Van Gogh’s world in Lust for Life (1956). He won eleven Oscars for his art direction, receiving the famous statuette that he himself had designed. Gibbons’s life and work will be marked by ADIFF with screenings of The Big Parade, Dinner at Eight, Grand Hotel and An American in Paris, and an exhibition and one-day conference on the role of design in the cinema at the National College of Art and Design.

As in previous years, IFI and ADIFF will showcase two new documentaries funded through the Arts Council’s Reel Art initiative. Niall McCann’s observational drama The Science of Ghosts centres on well-known Irish musician Adrian Crowley. While being interviewed by a film crew for his latest album, an interruption causes Adrian to ponder: what would a film about his life be like? What emerges is a humorous and original take on the power of storytelling. Rouzbeh Rashidi’s Phantom Islands is an experimental film that exists at the boundaries of documentary and fiction. With the visual intensity that has marked Rashidi as one of Ireland’s most radical and unique filmmakers, it follows a couple adrift and disoriented in the stunning landscape of Ireland’s islands. Both directors will attend their respective screenings.

Finally, the IFI will host a sold-out screening of Dónal Ó Céilleachair’s The Camino Voyage on Friday March 2nd, a thrilling documentary which sees a group of adventurers, including a writer, two musicians, an artist and a stonemason, take to the waters in a traditional boat which they built themselves.

Tickets for Careers in Film Day and the Cedric Gibbons screenings are now available here, the IFI Box Office on 01-6793477, and from www.diff.ie. Tickets for The Science of Ghosts and Phantom Islands are only available from online, by phone on +353 1 6877974, or in person at DIFF, 12 East Essex Street in Temple Bar.

Screening times at the IFI are as follows: