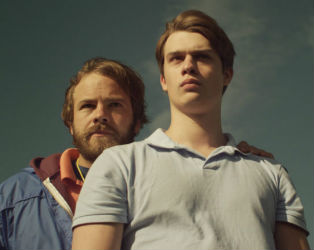 The GAZE International LGBT Film Festival returns to Dublin from the 1st to the 5th of August 2019.

The IFI is delighted to host three screenings in August, covering a range of perspectives reaching from Weimar-era Germany to the modern day.

HANDSOME DEVIL – Friday 2nd August 13.00
IFI Education is delighted to partner with GAZE Film Festival and BeLonG To Youth Services on a special 15-18’s screening of Handsome Devil, followed by a Q&A with writer/director John Butler. This tender tale fits the classic coming-of-age/coming-out mould with equal measures of comedy and drama peppering the road to self-acceptance. Featuring a 1980s indie soundtrack, a top-notch cast and some damn fine rugby, the film is an absolute gem.

DIFFERENT FROM THE OTHERS – Sunday 4th August 13.15
The film will include a live improvised score from pianist and composer Morgan Cooke.
An early film of the Weimar era, Different From the Others is an earnest and surprisingly progressive portrayal of two gay musicians falling in love, who find themselves embroiled in a malicious blackmail scandal — providing a scathing commentary to the oppression of the time. A priceless gem of LGBT visual history, the film was made as a reaction to Germany’s Paragraph 175 law, which made homosexuality a criminal offence. Thought to be the first pro-gay film ever produced, its subversive and clandestine depiction of homosexual love was thought lost for decades, before it’s eventual re-discovery in post-Nazi Germany.

MY BEAUTIFUL LAUNDRETTE – Monday 5th August 13.15
The film that launched the screen career of actor Daniel Day-Lewis, and established a new way of portraying gay and Asian characters in British drama. Ostensibly a rites-of-passage story about a young Asian man’s entry into the hard world of Thatcherite enterprise, the film has never been equalled for its complex portrayal of characters who are usually represented in polarised form. Best of all are the performances of Saeed Jaffrey, as the boy’s businessman uncle, and Shirley Anne Field as his mistress — these two truly embody all the contradictions which the film sets out to explore.