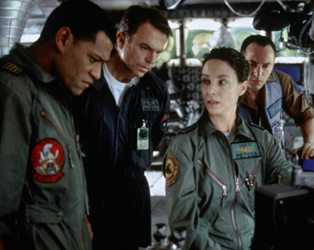 IFI Horrorthon 2017 is drawing ever closer, and as we count down the days until the ultimate festival of frights, we’re giving you a little more insight into what to expect from Ireland’s premier horror fest. Join us October 26th to 30th 2017.

One of the highlights of every Horrorthon is the superb lineup of classics which the Horrorthon crew bring back to terrify us once more, and this year they’ve gone all out with seven films which celebrate the best of the genre. Here’s a rundown.

The Crazies (1973) – Oct 27th, 13.10
The first of two tributes to the late George A. Romero, this is the story of what happens when a biological weapon is unleashed in a small American town which turns the populace into raging monsters.

The Dark Half (1993) – Oct 27th, 15.10
Another Romero classic, this time based on the novel by Stephen King, an author who is seeing a real resurgence in 2017. Timothy Hutton stars as a writer with a bit of a split personality. This will be the first Irish cinema screening for the film, which opened in

John Carpenter’s Prince of Darkness (1987) – Oct 27th, 23.20
A master returns to Horrorthon with Carpenter’s typically unique take on a battle against the forces of evil, with a side order of theoretical physics and top notch talent like Donald Pleasance and Victor Wong in front of the camera.

Body Snatchers (1993) – Double bill with above
Acclaimed filmmaker   Abel Ferrara (King of New York), digs into a different genre with an adaptation of Jack Finney’s famed 1955 novel, this time set on an American Army base.

Eaten Alive (1977) – Oct 28th, 13.00
Tobe Hooper also passed away this year, and we’re remembering the horror great with his follow up to The Texas Chainsaw Massacre, which features a lot of folks meeting their demise by crocodile.

Event Horizon (1997) -Oct 28th, 23.20
Paul W.S. Anderson may have caught some attention with Mortal Kombat but it was this gothic spaceship horror which really put him on the map. An impressive cast, stunning design and strong scares make the summary of ‘The Shining in Space’ seem pretty apt. 20th anniversary screening on 35mm film.

Angel Heart (1987) – Oct 29th, 23.00
Celebrating its 30th anniversary, we’re delighted to bring back Alan Parker’s supernatural thriller which features Mickey Rourke as a private eye who finds himself being drawn into the darkest recesses of New Orleans on the trail of a mysterious man. Also starring Robert de Niro and Lisa Bonet.

That’s just a sample of the more than 30 features which will show at IFI Horrorthon from October 26th to 30th, find out all about it here.