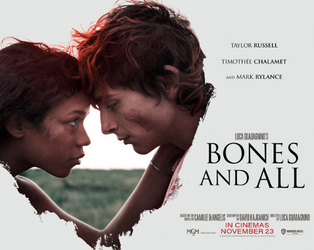 This week’s new titles at the Irish Film Institute from Friday, 25th November 2022 include Bones and All, Million Dollar Pigeons and She Said. Read on for a selection of reviews or pop in to make up your own mind!

“A contained character study about the most human of passions and desires, wrapped up in inhuman tastes.” 4/5 – Empire

“There is a sweetness to Chalamet and Russell that makes it hard to see them as monsters, and Guadagnino takes an empathetic, if not altogether approving, view of their tastes.” – The New York Times

“Timothée Chalamet and Mark Rylance are awe-striking in Bones and All.” – Mashable

“Bones and All proves difficult to watch, but looking away is harder still. – The New Yorker

“The fascinating Million Dollar Pigeons took us about the globe as it investigates the mysterious pursuit of pigeon racing.” – The Irish Times

“A journey equal parts hilarious, tragic and horrendous, Million Dollar Pigeons is an exploration into arguably one of the goofiest realms of capitalism. Gloriously shot, it offers insight into what feels like an absurdist parallel universe.” – Totally Dublin

“The film establishes a light, humorous tone and is quite engaging.” – Cineuropa

“There is so much to delight in Gavin Fitzgerald’s Million Dollar Pigeons, a documentary about the world-wide racing pigeon industry.” 3.5/5 – The Reviews Hub

“Admirably straightforward drama follows two of the reporters who cut through the defences around the apparently invulnerable producer.” 4/5 – The Guardian

“An exciting and often powerful piece of mainstream film-making that allows its heroes to emerge as normal people who make everyday mistakes. Highly recommended.” 4/5 – The Irish Times

“She Said is tense and gripping.” 5/5 – The Independent

“A powerful and gripping account of a sordid tale that is as old as Hollywood.” 4/5 – RTÉ

“A Quiet Thriller That Speaks Volumes.” – The New York Times

“Mulligan and Kazan ground this film with immense power.” 4/5 – Empire