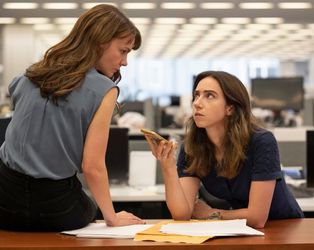 In 2017, New York Times reporters Jodi Kantor and Megan Twohey (played here by Zoe Kazan and Carey Mulligan) broke a story that shattered decades of silence around the taboo subject of abuse and sexual misconduct in Hollywood. Kantor and Twohey courageously took on an establishment that had too long been allowed to systematically protect abusers; the allegations revealed in She Said, their bestselling 2019 book, served as a catalyst for the #MeToo movement and eventually resulted in Harvey Weinstein being sentenced to 23 years of imprisonment.

Maria Schrader’s gripping adaptation takes its lead from other investigative journalism classics, such as All the President’s Men, The Insider, and Spotlight, focusing on the duo’s painstaking research, and the slow accretion of evidence gathered from victims’s testimonies needed to build a case, and the toll it exerts on their personal lives.