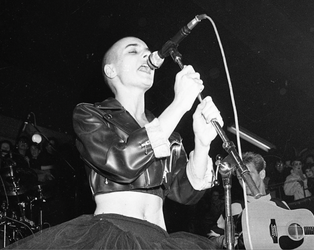 This week’s new titles at the Irish Film Institute from Friday, 7th October 2022 include Nothing Compares, Vicky and The Lost King. Read on for a selection of reviews or pop in to make up your own mind!

“A bracing guide to a brilliant individual who declined to conform.” 4/5 – The Guardian

‘Nothing Compares’ is a parable about fame, Ireland, and artistic integrity.” 4/5 – Entertainment.ie

“Director Kathryn Ferguson and her co-writers Eleanor Emptage and Michael Mallie want us to think about the way O’Connor’s influence is reflected in today’s outspoken female performers, a legacy they consider more significant than the Prince song about lost love.” 3/5 – Roger Ebert

“This new documentary shows many faces of Sinead O’Connor and highlights her genuinely incomparable voice.” – The New York Times

“ ‘Nothing Compares’ examines how the Irish musician paved the way for so many women’s rights issues — and was completely run over in the process.” – Rolling Stone

“It makes for a light, cosy history lesson, and there’s much to admire here: Coogan and Pope’s screenplay is warmly written, propped up by a pleasingly jaunty Hitchcockian score from Alexandre Desplat, and the playful fantasy flourish of including Richard himself as a twinkly-eyed apparition, played by Harry Lloyd.” 3/5 – Empire

“The film is a treat. Spearheaded by Hawkins’s performance, and guided by the dexterity of Frears’s craft, the The Lost King not only constructs an intriguing and understatedly bold character study but crystallises the latest historical evaluation of Richard III’s reign.” 4/5 – The Upcoming

“A story worth retelling in a film worth seeing.” 4/5 – Movies.ie

“It’s a history lesson that gives a voice to the voiceless” – Extra.ie