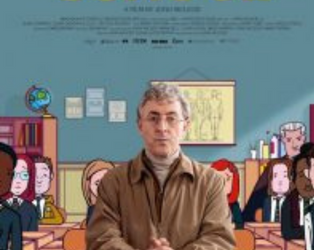 This week’s new titles at the Irish Film Institute from Friday, 19th August 2022 include Anaïs in Love, Free Chol Soo Lee and My Old School.  Read on for a selection of reviews or pop in to make up your own mind!

“Demoustier is excellent as Anaïs, a wilful gadfly with all the reckless impetuosity of youth” 4/5 – The Independent

“French queer cinema is striding out at its best in Anaïs In Love, set to be a sure-fire comfort hit for many generations to come” – Little White Lies

“Bourgeois-Tacquet’s debut is a feature that audiences will fall in love with. It’s bursting with vibrant personality, witty humour and tender honesty, all of which is carefully and elegantly crafted” 4/5 – The Upcoming

“It’s a kinetic portrait of someone stumbling out of love, falling into it again, letting it go and then picking it back up” – The Hollywood Reporter

“Anais and Emilie are the only couple that makes sense in this movie, and Demoustier and Tedeschi are a smoldering pair. They ooze sex appeal and charisma.” – Deadline

“This is a zippy, summery little romantic comedy, with a sting in its tail about what it means to grow up and into oneself” 4/4 – inews

“This story of miscarriage of justice is told with enormous sensitivity, intelligence and insight’” 4/5 – The Guardian

“A fascinating true crime documentary about a victim of injustice and the activist spirit the saved him.” – Financial Times

‘ “This was a landmark Asian-American social justice movement,” says Julie Ha, co-director of a documentary about Lee’s life and the movement to free him. “It has an almost mythical quality to it”: the battle for one man’s life spurring the burgeoning political consciousness of a generation” – The Guardian

“Chol Soo Lee’s complicated story deserves to be told; this film does a good job telling it.” 3/4 – Roger Ebert

“Free Chol Soo Lee” tells the story of a wrongfully convicted man who, after spending nearly a decade in prison, was ultimately vindicated in court.” – The New York Times

“Free Chol Soo Lee seeks out the answers to Lee’s case and legacy, providing a thought-provoking series of questions about Asian-American history.” – Movieweb

“Director McLeod — another of Lee’s fellow students — has fun with contradictory accounts, tall tales and faulty memories in a film that pulls the rug just as effectively as its subject and inscrutable star do” 4/5 – The Irish Times

“A riveting rollercoaster of a documentary” 4/5 – The Times

“Here is a documentary for anyone who’s ever suffered from impostor syndrome or ever fantasised about going back in time to their school days, to reverse all those heartbreaks and humiliations. In other words: all of us” 4/5 – The Guardian

“My Old School is a documentary exploring a true story that would have to be true as it’s too preposterous – it is absolutely nuts – for any screenwriter to have made it up.” – The Spectator

“The film as a whole leaves us with a different impression, one more sympathetic toward Brandon, despite individual attitudes about him” – AV Club

“The varied narrative devices and surreptitious construction to preserve the secret for as long as possible deliver an engaging film that will be best enjoyed if one restrains from searching the plot twist online before watching.” – Los Angeles Times

Anaïs in Love is also available on IFI@Home, rent here

“Written and directed by Danny Hiller, Out of Innocence is the dramatised story of The Kerry Babies Case in 1984, and therefore understandably emotive viewing” – Film Ireland Magazine