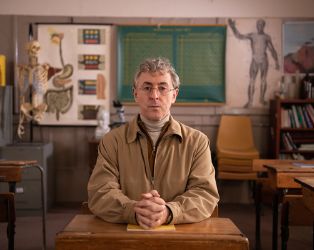 The phrase ‘truth is stranger than fiction’ has never been more apt than when used to describe the life of Brandon Lee, and his time at the well-to-do Bearsden Academy in Glasgow in the early ‘90s. Prior to arriving in Scotland, young Brandon had been privately tutored in Canada while he accompanied his mother, an opera diva, on tour before her tragic death. A gifted student, he set a course to enter medical school, making friends along the way, despite his awkward demeanour. He took bullies under his wing, introduced his classmates to seminal rock music, and even starred in the school’s production of South Pacific. But all is not as it seems, and Brandon is harbouring a secret. With Alan Cumming lip-synching to Brandon’s confessional tapes, Jono McLeod’s feature documentary tackles a tall tale with imagination and flair.