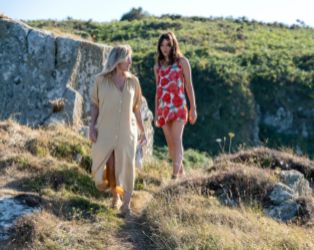 A young woman navigates the unpredictable twists and turns of life and love in Charline Bourgeois-Tacquet’s delightful debut feature; as airy as a summer breeze, Anaïs in Love is a worthy successor to the sun-dappled romantic longing of Éric Rohmer, given a contemporary twist through the spirited performances and breathless pace. Anaïs (Anaïs Demoustier) is impulsive, optimistic, and somewhat chaotic: her thesis remains unfinished, her rent is overdue, and her relationship is on the rocks. Following a dalliance with an older man (Denis Podalydés), she finds herself unexpectedly drawn to his long-term partner, the charismatic Emily (Valeria Bruni-Tedeschi), a successful writer; before long an affair begins which may just offer Anaïs the contentment she craves. Featuring stunning Paris and Normandy locations and performances of immense charm, Anaïs in Love is a confection that proves impossible to resist.