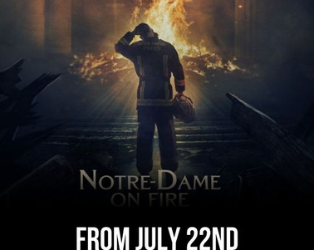 This week’s new titles at the Irish Film Institute from Friday, July 22nd 2022 include Robust, Notre-Dame on Fire, Mad God and Kurt Vonnegut: Unstuck in Time.  Read on for a selection of reviews or pop in to make up your own mind!

“It’s a role which Gérard Depardieu masters to a tee (to no-one’s surprise), brilliantly supported by his partner” – Cineuropa

“Overall, it’s captivating, charming and steps enough to the side of convention to give us something more grounded and touching.” 8/10 – Film Carnage

“This reconstructed documentary by veteran director Jean-Jacques Annaud glows with a mixture of reality, suspense and frustration” 4/4 – le News

“This is undoubtedly a work of historic significance, made by a master in his field” 4/5 – The Guardian

“Though sprinkled with reminders of Lynch and Cronenberg and others, Tippett’s defiantly adult vision has a freakish originality and a sorrowing tone that’s oddly touching.” The New York Times

“A very touching and insightful film.” 4/5 – The Guardian

“Intriguing, enthralling and enlightening, Unstuck in Time reignites a spark of affection in those familiar with him and serves as a wonderful introduction for the unacquainted.” – Totally Dublin

“It’s an opportunity to bask in Vonnegut’s wit and intelligence — to admire the crackerjack delivery of his jokes, savor the offbeat perfection of his prose, drink in the playfulness of his smile.” – The Hollywood Reporter

“‘Kurt Vonnegut: Unstuck in Time’ is a gorgeously rendered, unexpectedly moving appraisal of the life and craft of one of the best-loved literary voices of the late 20th century.” – Los Angeles Times