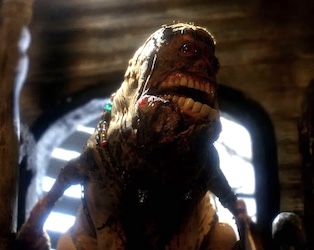 Visual effects maestro Phil Tippett, whose work can be seen in films such as Star Wars (1977), Jurassic Park (1993) and Starship Troopers (1997), devoted over 30 years to the completion of this labour of love, a dialogue-free mixture of stop-motion animation, puppetry, and live action. The resulting film is a peerless display of insane invention, a cornucopia of surreal, nightmarish imagery evocative of Švankmajer or Giger at their most extreme. With the world in torment, suffering at the hands of an angry and vengeful creator, an Assassin is sent by the Last Man (veteran director Alex Cox) to this literal Hell on Earth to destroy God. Tippett’s creation is viscerally disturbing, a world of deranged, terrifying denizens, and one of filth and fluid with an almost tangible quality not seen since Aleksei German’s Hard To Be A God (2013).